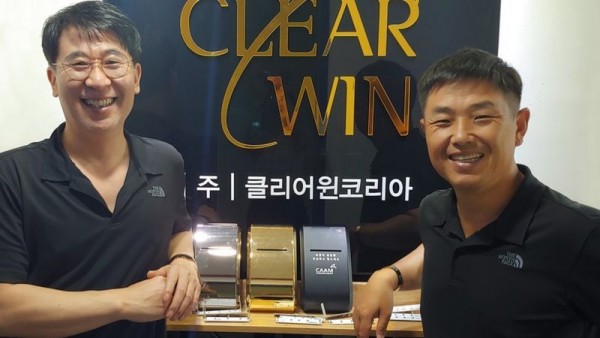 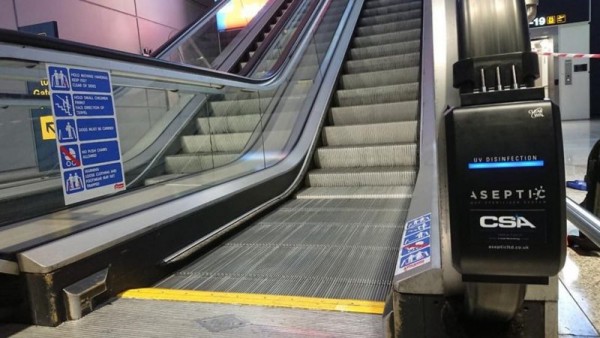 사진1: Kim Kyeong Yeon (left) and Kim Yoo Cheol with three of their ClearWin units
사진2: This ClearWin unit is in place on an escalator at London Stansted Airport


When Kim Kyeong Yeon's 13-year-old daughter fell and injured herself on an escalator, she set in train events that years later might prevent millions of people around the world from contracting Covid-19.

The accident happened because the teenager didn't want to hold the handrail due to hygiene concerns.

Kyeong Yeon, a South Korean interior designer, realised that many other people did likewise for the same reason. So he decided he would have a go at inventing a sterilising system.

This was in 2014, and a year later he unveiled his product. Called the Clear Win, it is a small unit that is attached to both sides of an escalator at the end where people get on, so that the handrails pass through them.

Powered by a dynamo, which generates electricity from the constant movement of the escalator, the product beams sterilising ultraviolet light (specifically the UV-C wavelengths) on to the handrail as it moves through it, destroying all viruses and bacteria.

As Kyeong Yeon had no experience of running a company, he brought on board his cousin, Kim Yoo Cheol, who was a businessman. Both were sure that they were sitting on a gold mine.

The little lights now packing a deadly punch
The robots helping to fight coronavirus
"We were 100% convinced that it was going to be very successful, because when it was released in July 2015, South Korea had just come out of the Mers (Middle East Respiratory Syndrome) outbreak," says Kyeong Yeon, who is 50.

Mers is a coronavirus similar to Covid-19 and, like the current pandemic, South Koreans had been required to wear face masks. However, the outbreak was much smaller than today's, and passed more quickly.

"No-one was interested in our product [at the time]," says Kyeong Yeon.

For the next four years the Clear Win continued to fail to gain traction. "We wanted to demonstrate their usage [to potential customers], but we were met with cold rejections. People thought they were unnecessary and pointless."

Realising that time was running out, Yoo Cheol, who was in charge of the finances, even cancelled his health insurance to invest in the venture, without telling his wife.

"Yoo Cheol would always say to me, 'Let's try for one more year.' And a year later he would again say, 'Just one more year,'" says Kyeong Yeon.

Then 2020 and Covid-19 arrived. The two cousins have been inundated with orders from around the world ever since.

Their sterilisers have been installed at airports including London's Heathrow and Stansted, shopping malls, hospitals, cinemas, football grounds including Arsenal's Emirates Stadium, and even at Masjid al-Haram, the Great Mosque of Mecca.

On Monday, Transport for London announced that it would be installing sanitising devices on 110 escalators in its underground stations, following a six-week trial using Clear Win devices at Heathrow T123 Tube station.

Utilising UV-C light to disinfect things may sound futuristic, but it has in fact been used for that purpose since it was discovered in the late 19th Century.

The light, a form of electromagnetic radiation, kills viruses and bacteria by damaging their DNA so that they cannot multiply. UV-C is also damaging to human skin and eyes, so it should not be pointed at them. No UV-C light is released outside of the Clear Win unit.

UV-C is produced by the Sun, but is absorbed by the Earth's ozone layer. The two other main ultraviolet light wavelengths - UV-A and UV-B - pass through. They are the types of ultraviolet light that people use sunscreen to protect themselves from.

At the start of this year there had been some speculation about whether UV-C did indeed destroy SARS-CoV-2, the virus that causes Covid-19 the disease, but several studies have concluded that it does. These include a report this month from the American Journal of Infection Control.

New Tech Economy is a series exploring how technological innovation is set to shape the new emerging economic landscape.

As the continuing pandemic has increased interest in using UV-C light as a sterilisation tool, the Clear Win device is just one of many such pieces of technology now on sale.

At the start of October, Turkish home appliance brand Beko launched a new range of products that incorporated the use of UV-C light. These include a fridge, tumble dryer and a "UV cleaning cabinet". The latter looks like a microwave, but users can put everything from mobile phones to keys, wallets, baby bottles and toys inside to be cleaned in 20 to 40-minute cycles.

Hakan Bulgurlu, chief executive of Arcelik, Beku's owner, says: "It has been a very difficult year [for everyone]. The products have been tailored to help consumers achieve professional levels of hygiene at home, and protect them from infections and diseases."

US business Healthe also makes a small box that uses UV light to clean mobile phones and wallets, and it is now producing a "UV wand" for plane maker Boeing.

The wand, a 2ft-long (60cm) strip of lights, which comes attached to a base unit that resembles a carry-on suitcase, is said to be able to sanitise a flight deck in less than 15 minutes.

It projects a different type of ultraviolent light called "far-UV" which can kill viruses, but unlike UV-C cannot damage human eyes or skin. "Far-UVC light kills microbes, but is harmless to humans," says Dr Alex Berezow, a microbiologist at the American Council on Science and Health.

Back in South Korea, Kyeong Yeon and Yoo Cheol are looking to take on more staff to keep up with demand at their factory 20km (12 miles) south of the capital Seoul.

"When things were especially difficult, we would drink beer by the Han River in Seoul to console each other. We still do that nowadays but instead to celebrate," says Kyeong Yeon.

"Even after the coronavirus pandemic has ended and our normal lives are resumed, I think many people around the world have been traumatised by this experience and might have fears for future viruses.

"So we think there will be a sustained interest in public health conditions and hygiene, giving our products further room to grow. We will continue to cater to people's demands for a safer world."